H.M.S.Nith hit by a Mistel 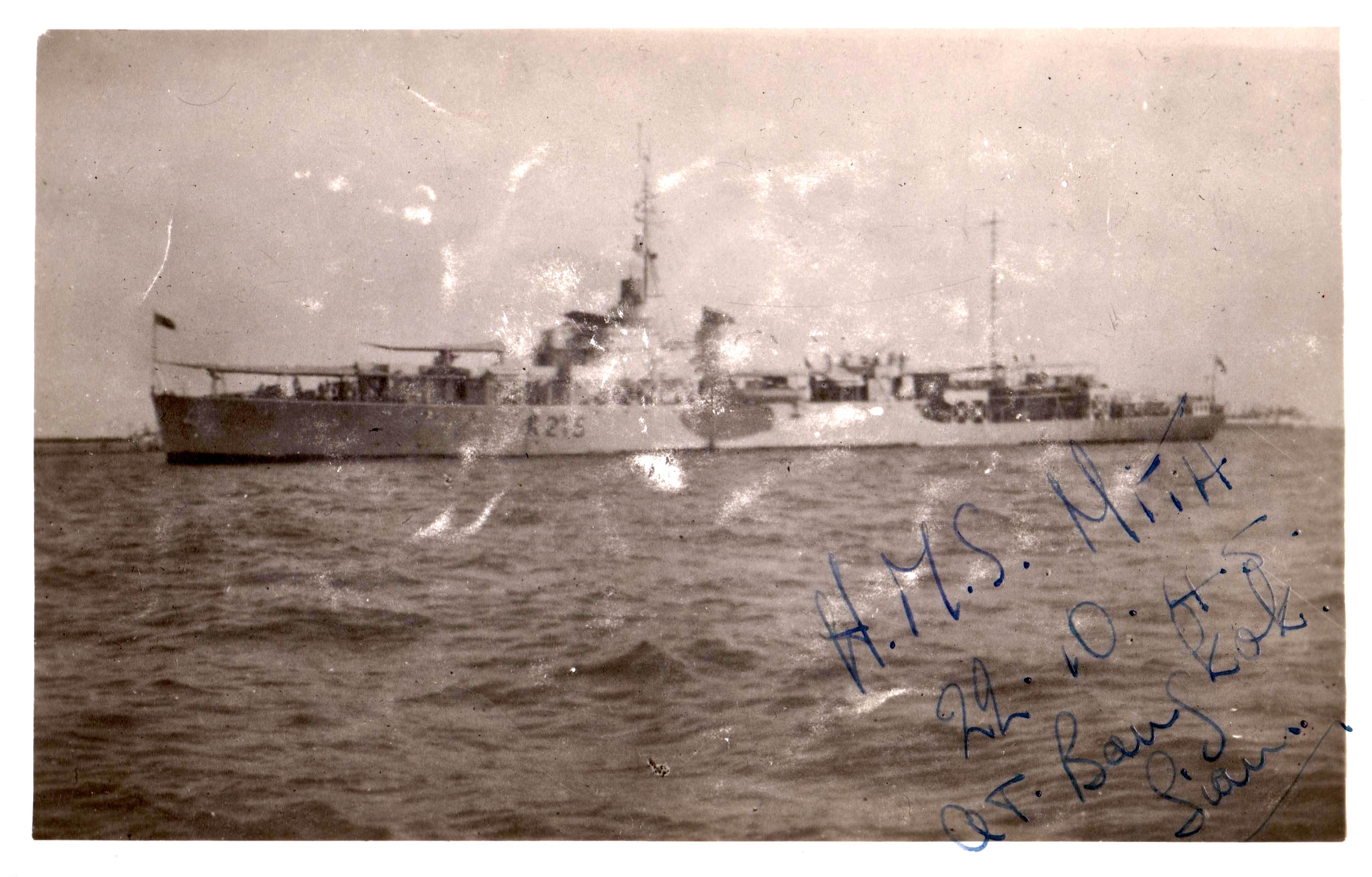 Photo was given me by Fred Lee veteran of the Nith. The Nith at that time was achored in front of Arromanche

Mistel was originally a bomber airframe, usually a Junkers Ju 88 variant, with the entire nose-located crew compartment replaced by a specially designed nose filled with a large load of explosives, with a fighter aircraft on top, joined to the bomber by struts.

The combination would be flown to its target by a pilot in the fighter; then the unmanned bomber was released to hit its target and explode, leaving the fighter free to return to base. The first such composite aircraft flew in July 1943 and was promising enough to begin a programme by Luftwaffe test unit KG 200, code-named "Beethoven".

You have a web page on your site which details how HMS Nith was involved in D-Day and how she was hit by the German weapon Mistel.

I note that the photographs on the site come from my father in law – Fred Lee.

As we prepare to return to Normandy for DDay70, Fred has found an old photo of HMS Nith which although taken in 1945, is pretty much the same ship layout as for DDay – namely a second mast added and the main 4” gun take away. Although not in great condition for such an old photo,  I believe that this is a rare photo of the ship in its correct layout in June 1944.

I attach the photograph and would welcome its addition to your website. As we show Fred photos on the internet of the Nith, over recent years he has become somewhat disgruntled with the inaccuracy of the photographs available. He blames this on an old website run by a now dead shipmate who wanted to show the Nith as a fighting ship (4” gun in place) rather than the HQ ship for the British Army during the Normandy landings.

I can confirm that Fred is very much looking forward to being in Arromanches for DDay70, and he will be seen each morning proudly raising the NVA Standard in Arromanches at 08:30 during the week of 6th June.

My father was on board the Nith as a Telegraphist. I am trying to contact any members of the crew and their families. I have set up a Facebook group for HMS Nith.

My father was on the bridge of HMAS Nith when the Mistel hit. He was just 18 years old. He is now 94 and lives in Australia.

My great uncle was on the Nith. I have lots of photos during its tours in Asia. His name was Les Buck.

William
This comment was minimized by the moderator on the site

Hello, my Gt. Grandfather was on H.M.S. Nith as a 1st class stoker. If anyone has a living relative that served on the H.M.S. Nith please contact me!!!
I have tried to contact Mr Fred Lee but no luck

My father, Arthur Hannaford, was aboard the Nith when the attack took place. He died in 1994 and went to his grave with no idea the ship had been attacked by a Mistel, a guided pilotless plane packed with explosive. He rarely talked about the...

My father, Arthur Hannaford, was aboard the Nith when the attack took place. He died in 1994 and went to his grave with no idea the ship had been attacked by a Mistel, a guided pilotless plane packed with explosive. He rarely talked about the war, but mentioned the Nith and D-Day to me once or twice when I was a boy. He always believed a bomber was attacking the ship but had been shot down, crashing and exploding alongside them . He spoke of his distress at seeing his shipmates' shattered bodies, and the fact that they were buried at sea (tipped over the side in his words) when the ship was limping back to England anyway and they could have had a proper burial.

Sirs<br /><br />My father was on the Nith William Otley as well on D-day, he now lives in Australia (95 this month)

My father William Harold Seymour was on HMS Ninth when the mistel struck the ship. He was a chief petty officer telagraphist / radio man. He was saved because he was delivering a message to the bridge at the time and all the other telagraphists...

My father William Harold Seymour was on HMS Ninth when the mistel struck the ship. He was a chief petty officer telagraphist / radio man. He was saved because he was delivering a message to the bridge at the time and all the other telagraphists were killed.<br />He never talked much about the war but I knew he was very proud to have served at Normandy in HMS Nith.

Read More
David Seymour
There are no comments posted here yet

Stephen M. Fochuk posted a comment in Flying Officer Richard Cyril Joseph Brown
Puff of Smoke. Was this written by you? Stephen
about 2 days ago

Bill Osborne posted a comment in Flight of Typhoon Ib PD495 and Flying Officer M J Cheyney on 1945-01-24
John Cheyney survived the war, and subsequently moved to Brazil, where he died earlier this year (Se...
about 2 weeks ago

Everette Coppock III posted a comment in 85 Ordnance Battalion, Medical Detachment stayed at Plympton Devonshire on 22 may 1944
Where did the 85th Ordnance Battalion arrive at and depart from which ports? Dates?
about 2 weeks ago

Duneane posted a comment in Flight of Spitfire Vb W3316 and Sergeant G F Breckon on 1941-07-24
His name was Graham Francis Breckon and his amazing account of being shot down in WW2 can be found h...
about 3 weeks ago

Everette Coppock III posted a comment in 3812 Quartermaster Truck Company stayed at Hereford Herefordshire on 12 may 1944
Can you provide information for the 501st Transportation Company during Red Ball Express as the unit...
about 4 weeks ago

Philip C. Blumenthal posted a comment in Avro Lancaster III (JB226 LQ-G) on a mission to Ludwigshafen on 1943-11-18
To whom it may concern, This message concerns the matter of Lancaster JB226. I was a volunteer at th...
about 4 weeks ago

Everette Coppock III posted a comment in 3812 Quartermaster Truck Company stayed at Hereford Herefordshire on 12 may 1944
Is the 3812 QM truck Company the same as 501st Transportation Company inactivated in 1995?
about 4 weeks ago

Shaun Greenwood posted a comment in Anchor point before D-Day, position 156 in area 4 in The Solent for: Avonville
Trying to find an aerial photograph of HMS Campania anchored in Sandown Bay June 1944
about 1 month ago

Jack C Waterfield posted a comment in 3574 Quartermaster Truck Company Transportation Corps stayed at Burley Hampshire on 28 july 1944
Good Day Fellow Veterans! I am writing with information that I have letters send to local newspaper...
about 1 month ago

Henk Brul posted a comment in Avro Lancaster I (RA564 AA-P) on a mission to Munster on 1945-03-20
The Callsing is incorrect. instead AA-P it should be JN-P. The Lancaster RA564 with onboard the Barr...
about 1 month ago

Matt Davis posted a comment in Flight of Mosquito VI NT119 and Sergeant W Freeman on 1944-09-26
Activity over the enemy's airfields picked up in late September and on the night of the 26th nine ai...
about 1 month ago

Mark sanders posted a comment in Avro Lancaster I (R5499 EM-D) on a mission to Frisian Islands on 1942-08-11
This was my great uncle Gordon Easley’s Aircraft, he was the nav.
about 1 month ago

Joyce McDonald posted a comment in Avro Lancaster III (DV267 SR-K) lost at Tolbert on 20-02-1944 (SGLO ref: T3428)
My father was Les Burton the navigator. I have his wartime log book and prisoner of war diary and th...
about 1 month ago

Debra Coleman posted a comment in Avro Lancaster I (ME372 9J-U) on a mission to Hamburg on 1945-03-22
My 1 cousin x 2 removed, was an air gunner and he was on that Lancaster Bomber Sgt Graham Howard Whi...
about 2 months ago

Jason Parry posted a comment in Avro Lancaster I (ME852 WP-Q) on a mission to Braunschweig on 1944-08-13
Thank you for your work Roland Camier was a 2nd cousin of my mine, so grateful to get to know him...
about 2 months ago

Kristoffer Rasmussen posted a comment in 581 Ordnance Ammunition Company stayed at Beaworthy Devonshire on 21 april 1944
I'm researching a grave marker for a pet named "Ras Bueten Born in England 1943 Died in Dallas Texas...
about 2 months ago
You are now being logged in using your Facebook credentials