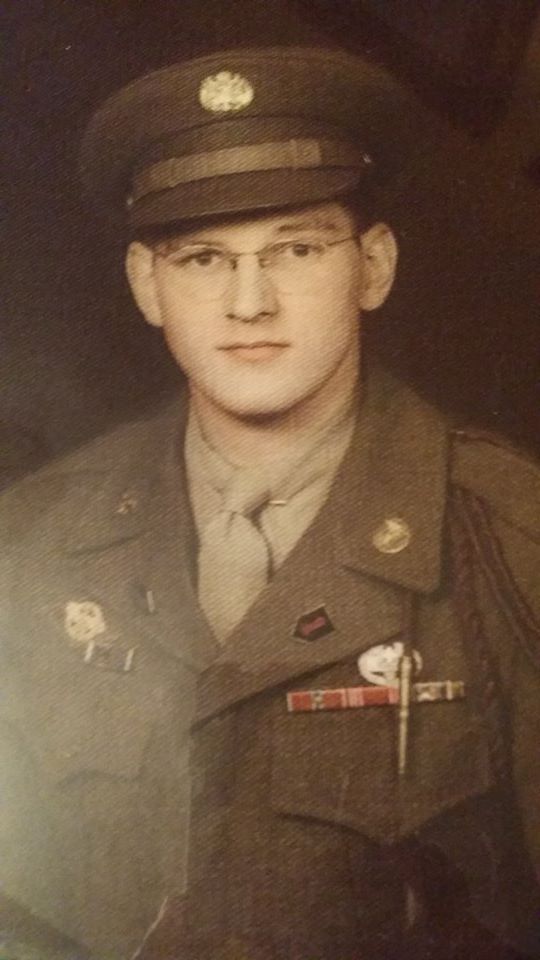 D-Day story of T/5 Waldo Werft 15382094 HQ Co. Regimental Medical Detachment, 16th.Inf.Regt., 1US Infantry Division.
On 1 June, 1944, my outfit, the Regimental Medical Section, boarded the USS Samuel P. Chase in Weymouth, England. We had been briefed previously, and were briefed a 2nd time on 5 June, 1944 and issued impregnated clothing for protection against a potential gas attack by German defenders which never happened. We had also been issued special gas masks.

On 5 June, 1944, our huge convoy left Weymouth Harbor at 0415 hrs, and arrived about nine miles off the coast of Normandy on 6 June, 1944 in the vicinity of Colleville-SUR-MER.
The Regimental Medical Section disembarked from the Samuel P Chase at 0600 hrs on. 6th June, 1944 and we descended down the dangerous rope ladders, due to the rough choppy sea as the we transferred into the LCM below.I later heard that some men descending from other ships, actually lost their footing and drown. It was treachereous. We were crammed in the LCM which held approximately 50 men.
About 15 or 20 minutes after we departed from. the mother ship, the guys started getting deathly seasick, and vomiting on each other as the sea was very rough, and was pitching and rolling.In addition we were getting soaking wet from the waves of ice cold sea water splashing into the LCM on us. I was one the fortunate ones who never got seasick. I can't remember getting vomited on. After what seemed .hours, we finally alligned for the beach assualt about 4 miles out.

Many in our boat were so sea sick, they just wanted out of that boat, and on to the beach, no matter what lay ahead. I remember thinking it would probably be a lot worse than Sicily, but hoping that the troops on the beach were doing well, or we wouldn't be landing. As we approached the beach in closer and closer, Machine gun bullets started rattling on our LCM, and over our heads so we hit the deck as well as we could, considering how we were crammed in that boat. There was also deadly sniper fire. I later learned the enemy had at least 200 snipers shooting and many on other boats ahead of us had soldiers picked off as they were exiting their boats. The german machine guns fired 1500 rounds per minute, which meant as many as 25 bullets a second were coming our way.

As we approached about 75 yards from the beach, the ramp was dropped, and I jumped chest deep into the icy cold water, and with about 50-60lbs of gear weighting me down, which pulled me under temporarily, but I somehow managed to approach a big steel obstacle which I touched. It was probably mined, but it didn't explode, or I wouldn't be descibing it today. Even though I couldn't swim, I somehow made it to shore under unbelievable firepower. That beach was really zeroed in with artillery, mortars, machine gun and sniper fire. I only weighed about 130lbs and the gear I was carrying really hindered me especially in the water.

Upon reaching the beach, the number of dead was appalling. The water was pink, and there were many bodies floating face down as well as body parts. As I headed for the cover of the ridge, as far as I could see the 1st and 2nd waves were all bunched behind that ridge, dead, living and wounded and many were shouting "medic" As I reached the ridge, I was right next to my ex 1st/Sgt in Sicily who had a hugh leg wound, and the 1st man I knew and talked to on the beach. I proceeded to treat many wounded, as I moved down the beach as mines and barbwire were in front of us as the Germans comtinued the murdereous fire all over the beach.T/Sgt Herbert Goldberg , my 1st/Sgt under orders of Major Charles E. Tegtmeyer was attempting to round up all of his medics,including me who had gotten separated treating so many wounded. They were trying to get us off the beach, where we were destined to die. About a thousand yards down the beach, the Engineers cleared mines to eastablish a single file path up to higher ground to escape the withering firepower on the beach. I seem to remember our Regimental Commander, Colonel George Taylor, ralleying the troops up and down the beach to get off the beach or face certain death. It is a miracle to me how so many got safely off the beach. Our Casualities were awesome as we lost at least one third of our regiment or 1000 killed wounded or missing in about an 8 hr period. I was on that beach probably about 4 hrs from when we landed at 0815 hrs till about noon.

We continued crawling and crouching as we proceeded west along the shale about a 1000. yards seeking to find a safe exit off that bloody beach. we eventually found a single file path leading up the hill in a meadow in which the the Engineers had cleared of mines. After croching up the single mine free path, We established a medical aid station, dug foxholes for ourselves and the wounded. We were safer from artillery fire, but still vulnerable to mortar fire. I was dug in within 5-7 feet of a personal friend, Cpl Kisker, our dental Technician, who shouted to me "I'm hit" as blood was gushing out his neck. He had been hit by shell fragments and was helpless. He was eventually evacuated to England, and several months later able to return to duty in our outfit. I was very happy to see him again. Many wounded were littered to the beach in hopes they would be returned to hospital ships. This was a huge, hazardeous task for the Navy as the beach was still under murdereous bombard- ment from the enemy.

We had a great view of the beach from higher ground. I remember an ammunination ship on the beach that kept exploding ammunition as it was hit by enemy fire. That night German planes came over and attacked our ships, and it was the greatest fourth of July fireworks show I ever saw, as it seemed like all the ships were firing at the planes, as the ammunition ship on the beach was still exploding ammunition. The 16 inch Navy shells being fired over our heads sounded like freight trains, and we had no ear protection. All in all , spectacular events were happening as troops kept pouring ashore. It was the most noisy day of my life. A trickle of enemy Pows started coming in as our troops began making progress moving inland ahead of us. The next day, we continued moving into Normandy, fought thru Normandy, Northern France, Belgium, and all through Germany into Czechoslovakia where we met the Russians on May 5, 1945. I was in the Army of occupation in Bamberg, Germany till Sept.1945 when I was sent home for discharge, after 2 1/2 years overseas. God really protected me, as I came home without a scratch!

More information about the circumstances for Walo Werft

More records of the unit of Waldo Werft (16 Infantry Regiment (USA)) were he was attached to: click here 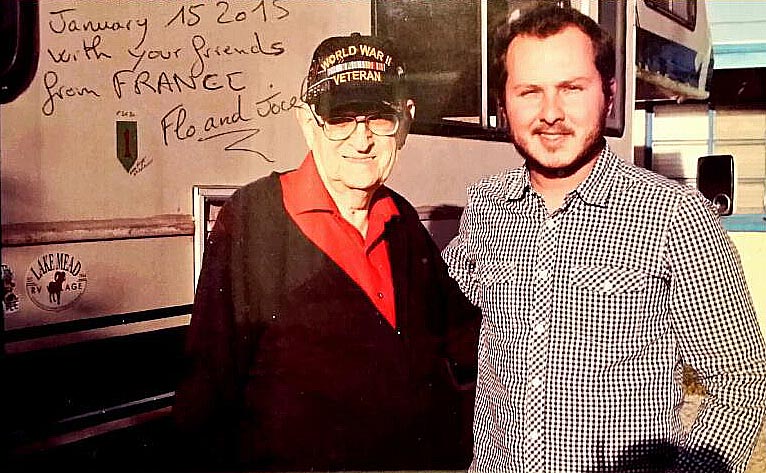 During WW2 Medical Detachments were “attached” to each Infantry Regiment. Their mission was to help conserve the strength of the Regiment by taking the necessary preventive and sanitary measures, and provide appropriate medical and dental treatment.
Officers and Enlisted Men were adequately trained in medical and other skills. EM were not only trained for different duties such as: Dental – Medical – Sanitary and Surgical Technicians, but also as Record Clerks, Litter Bearers, Podiatrists, and Light Truck Drivers.
Detachments were responsible for first echelon medical service in combat situations, including emergency medical treatment in the field, removal of battle casualties, and establishment of Aid Stations for the reception, triage, temporary care, and treatment of casualties.
In situations other than combat, the Medical Detachment provided basic medical care by operating one or more Dispensaries for emergency treatment and care of the Regiment’s sick and injured. In addition, it was responsible for routine duties, proper sanitation, physical examination, first aid, personal hygiene, and the clerical work necessary for proper administration of the Detachment. On the march, whether in combat or not, the Detachment always rendered emergency medical treatment. Three Company Aidmen accompanied each Rifle Company; that is one for each Platoon. Each Battalion Section, less the Company Aidmen and the Battalion Surgeon, immediately followed the Infantry Battalion it supported. Battalion Surgeons rode with their organization commanders or their immediate Staff. One Ambulance from the Collecting Company (the Infantry Division’s organic Medical Battalion), responsible for second echelon care, was attached to each Battalion Medical Section for the duration of the march.
When march casualties occurred, they were either treated by a Company Aidman, and then rejoined their units, or were put in an Ambulance, or kept under observation. All casualties (sick, injured, or disabled personnel) separated from their organization, were to be tagged by the Medical Officer (arms and individual equipment, were to remain with the casualty). In order to care for any casualties, Collecting Posts were often established along the road by the Collecting Companies. (source).

73 yrs ago today I was on the Samuel P. Chase in a huge convoy leaving Weymouth, England about 4pm on our way to about 9 miles off the coast of Normandy. It was a 12 hr trip. We disembarked from the Samuel PChase about 6am june 6 1944 down the rope ladders into a very rough sea into a Landing craft medium.About 15-20 minutes later men started getting sea sick and throwing up on each other. Fortunately that didn't happen to me. We had about 50.men packed together in that Landing Craft Medium and were miserable as the ice cold sea water splashed on us.. For a lot of guys, the sea sickness was worse. As we drew closer to the beach, machine gun bullets began hitting our boat, and whizzed over our heads, occasionally an artillery shell hit close by, as we hit the floor as best we could in our overcrowded boat. About 75 yards out I jumped in the ice cold water up to my chest, sank under the water, (i can't swim) and somehow came up and thru great effort made it forward toward the beach and touched a steebarrier that could have been mined. Some even blew up boats! Somehow, I finally made it to the beach fairly exhausted with about 60 lbs on my back. Drowned bodies were floating in the pink bloody water as about 200 snipers and machine gunners were really taking a toll as we stepped off
the landing craft. Dead bodies were all over the beach,
as I somehow made it to the small shale protection where the 1st and 2nd waves were pinned down:
Dead, living, and wounded stacked together like sardines, and the wounded were hollering Medic, and I was a Medic, so.I had to get busy. The beach was zeroed in with murdereous artillery, mortar, machine gun and sniper fire all over the beach and devastating
To incoming landing craft, which just kept pouring in according to plan. The casualty numbers were appalling. This is a portion of my memories of that awesome day 73 yrs ago!
Great Respect and Honor to all the fallen heroes of
that tragic day in American history.