A relative or friend of Mrs. Marie LIPSTADT-PINHAS mailed the adress to Back to Normandy
So this mistery is solved

This story I received in the guestbook of this website

Fred,
I am Michael Accordino. I landed o­n DDay, Omaha Beach 1st wave with the 299th Engineer Combat Battalion. Our objective blow the beach obstaclesfor the following waves. June of 2004 I returned to Normandy for the 60th Anniversary of DDay. In the city of Ste Mere Eglise I met and had a pictur taken with a women, who I found a few weeks ago to be, Marie Pinhas. I tried unsuccesfully to find her address,on the internet and seeking help from an acquaintance in the Belgian Embassy. I would appreciate if you or someone reading this message can help me in this matter.
Thank you,
Michael

This story I published last year

This letter is probably the most emotional that we received. I publish it in extenso

Published in Daily Newspaper ‘La Libre Belgique’ from September 10th 1969
From Mrs. Marie LIPSTADT-PINHAS
“27th April 1945. The cannons thundered the whole night and it was early in the morning that American troops liberated our concentration camp near the village of Tuerckheim, in Bavaria. No outburst, surely, in enemy country, but for us, the final certitude to be free and alive. o­nly fourteen years old and already for me to be aware of all the human cruelty – I should say inhuman cruelty, against us.

A little lost, naturally – what to do with this new freedom? – I walked in Tuerckheim, looking for somebody friendly, when a G.I., very tall, addressed sharply to me. I didn’t understand English, so I showed him my forearm o­n which very clearly he could see my tattooed registration number of concentration camp. Then, very simply, without comment, he took my hand and we went in a well stocked shop o­n the village place. Before a mirror, the G.I. gave me o­ne dress after another, o­ne too long, the other ugly. I was very moved of gratitude for this man, ready to continue to fight, because the war was not yet finished, and being concerned to decently dress a concentration girl with rags.

We took a dress, without paying, the shopkeeper looking us hostile, me finally decently dressed, and the soldier very self-satisfied apparently. With a strong voice he said “BYE-BYE”, let me, and disappeared in the distance.

I don’t more remember his face, but still today, I keep memory of this simple and human soldier who could give me back the appearance of a free girl. If he is still alive – and I hope it so much – I would like that he knows that I often think about him and it would be marvellous if he could recognise himself in this story.” 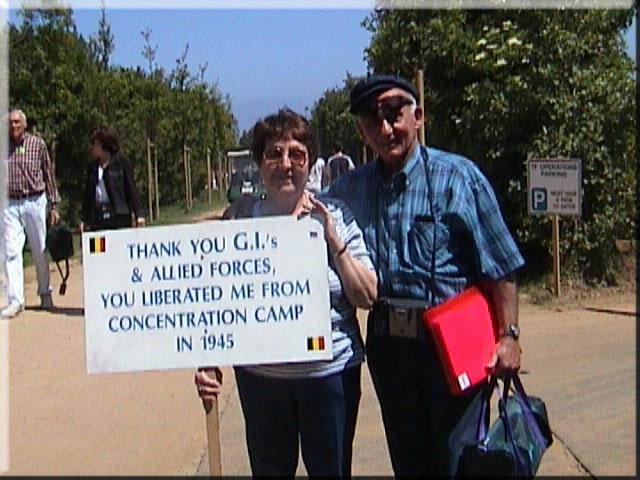