On Thursday 04 March 1943, a member of the 75 Sqdn, Sergeant E H Weaver, took off from Newmarket Heath in the United Kingdom. His mission is mentioned elsewhere on Back to Normandy. You can find the other details of this mission by searching here. Training and cargo flights are not separately mentioned as a mission. The plane left at 20:03. 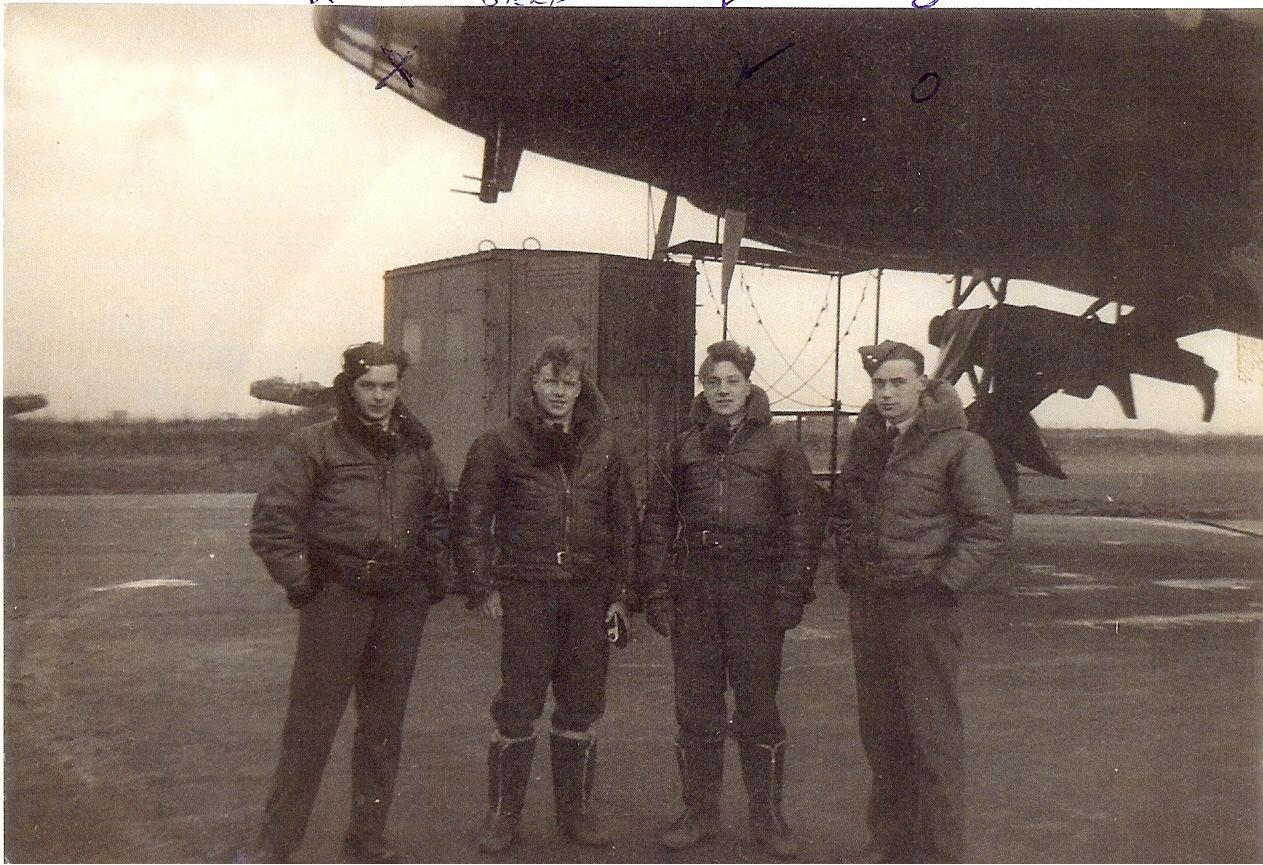 photo:Frank with crew underneath the nose of their Stirling Bomner - 75 Squadron

Campaign report of the USAAF:

(Eighth Air Force): VIII Bomber Command Mission 39: 71 B-17s of the 1st Bombardment Wing are dispatched against the marshalling yard at Hamm, Germany; 16 drop 40 tons of bombs on the target at 1043 hours; we claim 13 enemy aircraft destroyed, 3 probably destroyed and 4 damaged. We lose 4 B-17s and 9 others are damaged; casualties are 1 KIA, 7 WIA and 33 MIA. Another 28 B-17s hit the shipyards at Rotterdam, The Netherlands dropping 70 tons between 1020 and 1021 hours. We claim 3 enemy aircraft destroyed; we lose 1 B-17 while 15 others are damaged; casualties are 9 MIA. This is the first Eighth Air Force attack on a Ruhr industrial target. To divert the enemy, 14 B-24s of the 2d Bombardment Wing fly a diversion without a loss. The Spitfire Mk Vs of the 4th Fighter Group fly 26 uneventful sorties, 24 on fighter patrols and 2 on offensive patrols over the Ostend/Dunkirk, France area.

Campaign report of the RAF:

Hamburg. 417 aircraft - 149 Lancasters, 123 Wellingtons, 83 Halifaxes, 62 Stirlings despatched with 10 aircraft - 4 Lancasters, 2 Wellingtons, 2 Halifaxes, 2 Stirlings - lost, 2.4 per cent of the force. Visibility was clear over the target but the Pathfinders made a mistake, possibly thinking that the H2S indications of mudbanks in the Elbe which had been uncovered by the low tides were sections of the Hamburg docks. Most of the Main Force bombing thus fell 13 miles downstream from the centre of Hamburg, around the small town of Wedel. Even so, a proportion of the bombing force did hit Hamburg which suffered 27 people killed and 95 injured and whose fire brigade had to put out 100 fires before devoting all its energies to helping the town of Wedel, which suffered so heavily. The damage at Wedel included a large naval-clothing store burnt out as well as several important industrial concerns destroyed in Wedel's harbour area and this illustrated another Bomber Command view: that bombing could usually be useful even if the wrong target was hit.

5 Mosquitos to the Ruhr, with more direct hits on Krupps, 14 aircraft minelaying in the Frisians, 5 OTU sorties. 1 Stirling minelayer lost.

12 Mosquitos attacked railway targets at Arnage and Aulnoye without loss.

6 Mosquitos to the Ruhr, 27 aircraft minelaying in areas as far south as Bayonne and as far north as Gydnia, 16 OTU sorties. 1 Lancaster minelayer and 1 OTU Wellington lost.

With thanks to the RAF and USAAF.net!

This record can also be found on the maps of Back to Normandy with Google coordinates. You can find the maps by clicking on this link on this location.

There are several possibilities to investigate the flight records on Back to Normandy. All the flights are plotted on maps, sorted "day by day", "by squadron", "by type aircraft", "by year or month", "by location" and much more! Don't miss this!!!

If you have any information that you want to share, please add your comment at the bottom of this record. Or send your information to . This information will be added to the record.

Your photos and your information are very welcome! The young do care and with your help we keep up the good work.