I am glad to see you here!

Please also enjoy my music for Back to Normandy and all my other compositions divided over 12 albums.

Special attention here for the two albums: Omaha Beach and Back to Normandy!

The oldest and probably the best known of all American in-fantry divisions is the 1st, sometimes nicknamed the "Fighting First," often called by its proud members simply "The First,"and most recently known as "The Red One." Germans who had seen the red "1" on 1st Division shoulders in North Africa,Sicily, and all over the European continent gave the Division that name, and the Ist's soldiers have since used it themselves. A German, incidentally, involuntarily provided the 1st with its shoulder patch.

According to legend, the original red "1" was improvised from the cap of an enemy soldier who had been killed by a 1st Division Doughboy during World War I, when the Division earned the right to proclaim itself first in France, first to fire on the enemy, first to suffer casualties, first to take prisoners, first to stage a major offensive, first to enter Germanyand-as an equally notable exception-last to come home.

The Fighting First got off to an early start in this war when, after amphibious training in the States and in England, it surged ashore at Oran on D-day of the North African invasion, November 8, 1942. It fought through Tunisia, taking heavy casualties at Kasserine Pass, but holding its ground against the enemy and living up to its motto, "No mission too difficult; no sacrifice too great, as it hammered away at the vaunted Afrika Korpsat Gafsa, El Guettar, Tebessa, and other battlefields. The Ist's second D-day was at Gela, Sicily.

In 37 days, the Division took 18 cities, inching its way up cliffs and along tortuous mountain trails, and distinguishing itself by smashing the Hermann Goering Division and taking the important objectiveof Troina, where the 16th Infantry Regiment, which dates back to 1798, made a gallant frontal attack coordinated with a flank assault by the 18th Infantry, a comparatively new outfit dating back only to 1812. After Sicily, the 1st sailed back to England to get ready for the invasion of the Continent.

On D-day in Normandy, June 6,1944, it went ashore at Omaha Beach, the most strongly forti-fied section of the coast. Some of its units suffered 80 percent casualties in the first bloody hour of fighting, but the Division hung on to the beachhead, forced its way inland by sheer determination, destroyed a whole German division that stood in its way, and prompted Ernie Pyle to write, later, "Now that itis over it seems to me a pure miracle that we ever took the beach at all." For their heroism at Omaha, 740 men of a single battalion of the 16th Infantry were awarded the Bronze Star. In the July breakthrough out of Normandy at St. Lo, the 1st swung to the west, took Marigny, and then trapped 30,000 Germans near Coutances.

In August it moved 300 miles in aweek to take Soissons, where in the last war the 1st had suffered 9,000 casualties in four days. (Major General Clarence R.Huebner, who led the Division at the time, had been a battalion commander in the 1st at Soissons in 1918.) The Division continued to Aachen, fighting through the city street by street and house by house after the besieged defenders refused to surrender. Then the 1st found itself in the thick of the Hiirtgen Forest fighting.

Companies E and F of the 26th Infantry Regiment were completely wiped out, but replacements for the lostunits, fighting from foxholes against a heavy tank-infantry attack, avenged their comrades by killing 1,200 Germans in three days. During Rundstedt's counteroffensive in the Ardennes, the 1st successfully attacked in the St. Vith-Malmedy sector, drove on to the Rhine, and, when the 9th Armored Division captured intact the bridge at Remagen, swept across and raced deep into Germany. By V-E Day, all three regiments of the Division hadbeen cited and several smaller units had earned additional honors. The men who wore the Red One-had good cause forthinking that the 1st was still first.

Domfront, France
Domfront
City|Area
Status coordinate The location is in a (the vicinity of a) city or town
Hits1,467 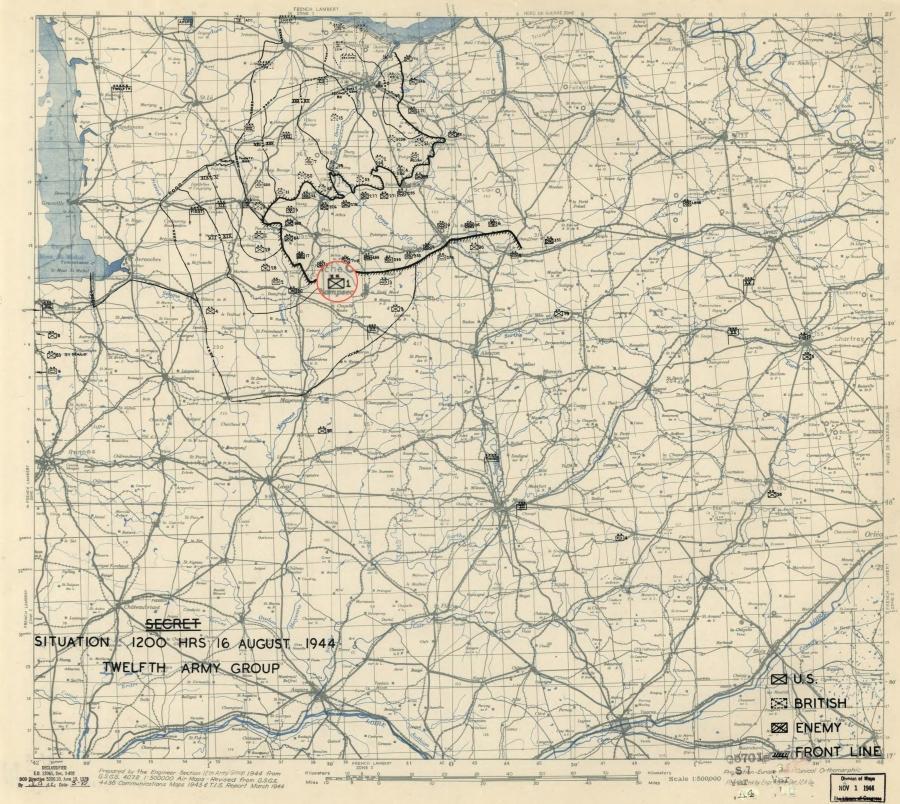 Marigny, France
Marigny
City|Area
Status coordinate The location is in a (the vicinity of a) city or town
Hits1,757 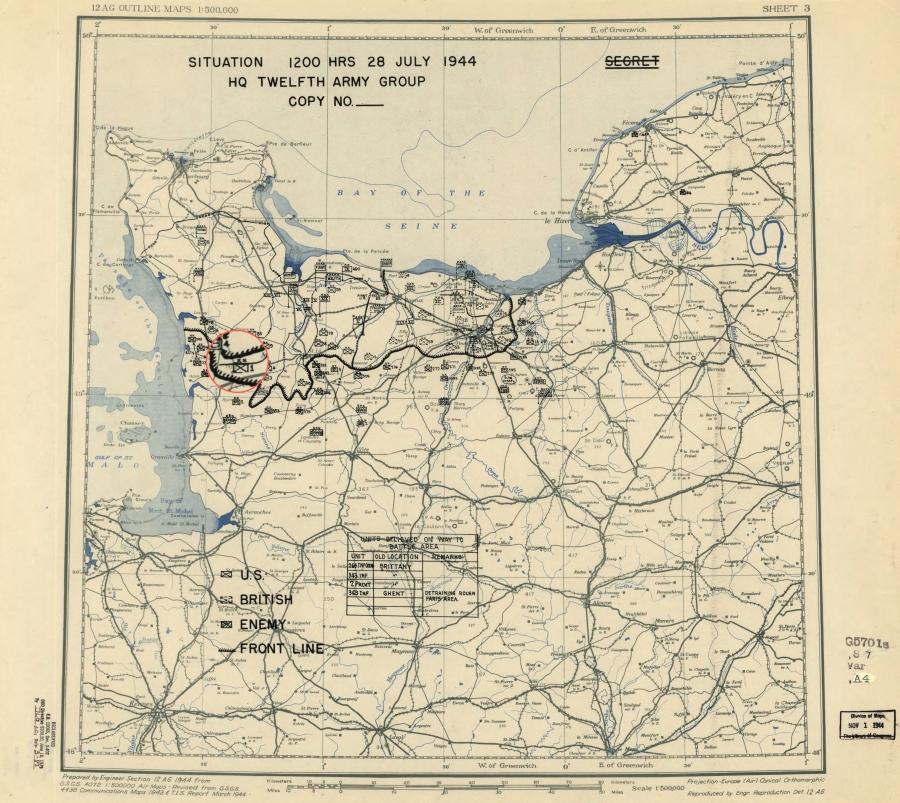 Normandy, France
Normandy
City|Area
Status coordinate The location is in this area
Hits2,190

Bayeux, France
Bayeux
City|Area
Status coordinate The location is in a (the vicinity of a) city or town
Hits1,187 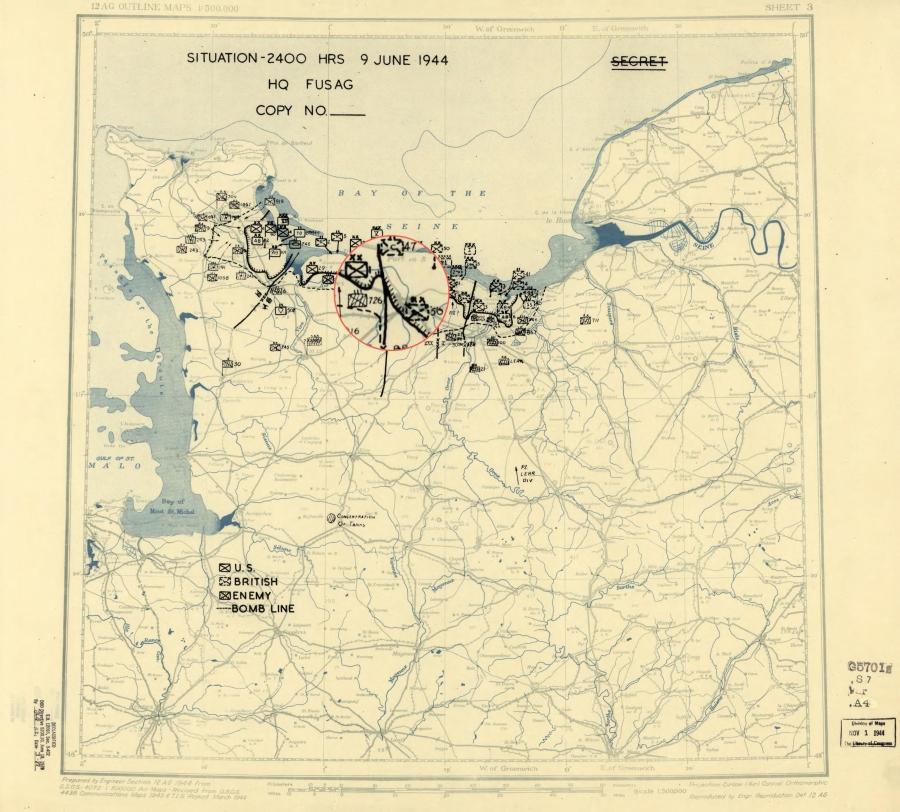 1 Infantry Division (USA) poised to serve in the breako...

Périer, France
Périer
City|Area
Status coordinate The location is in this area
Hits1,069 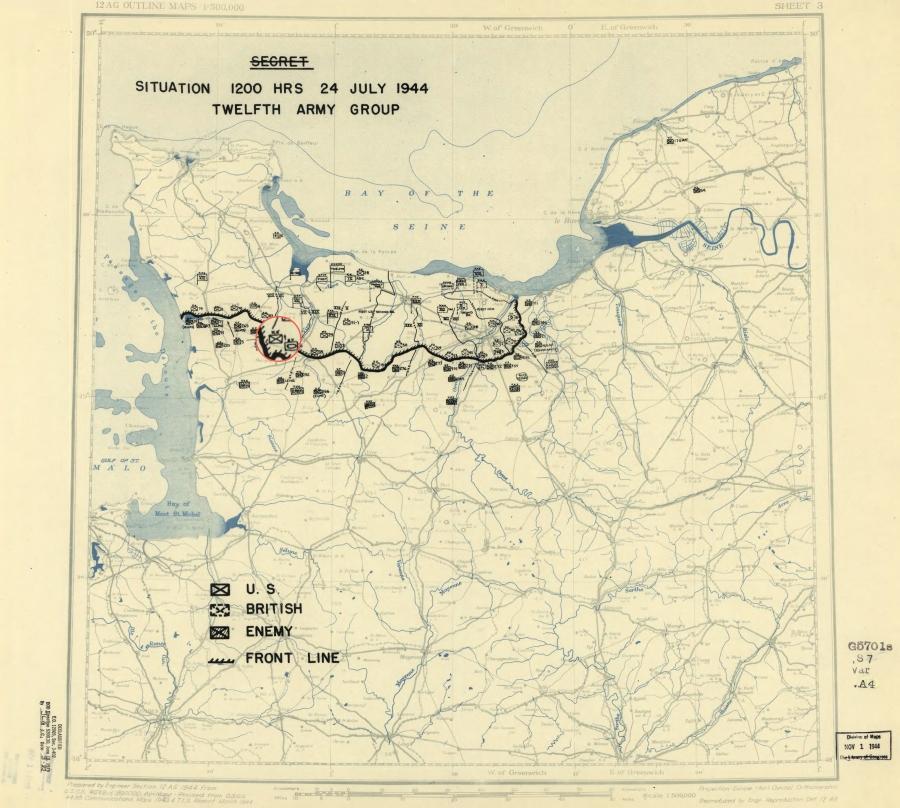 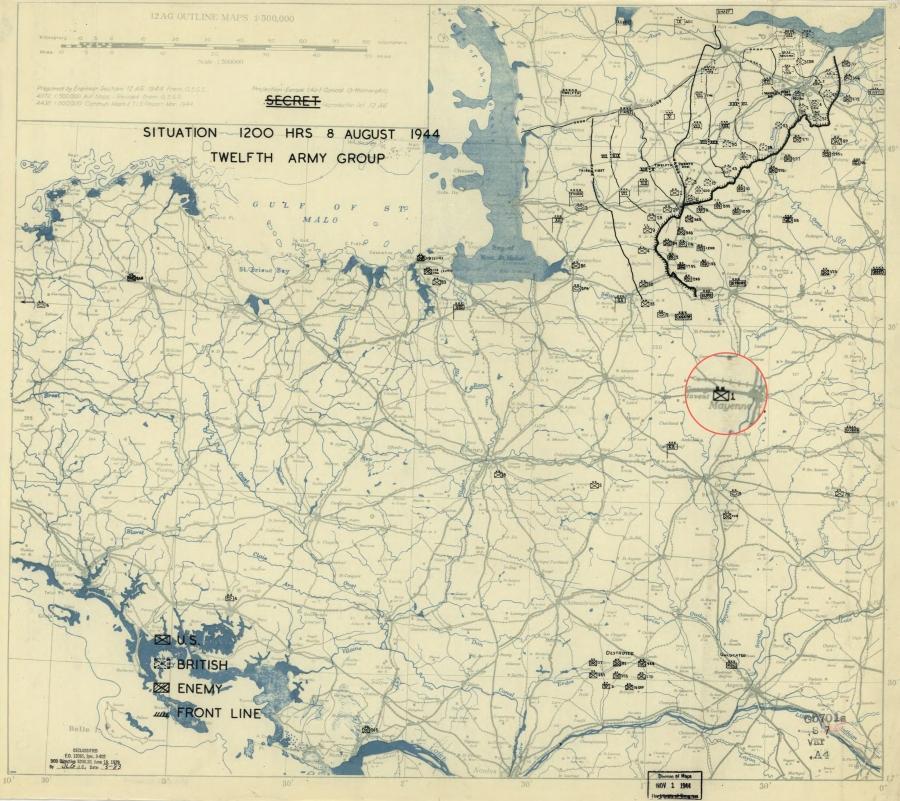 Caumont, France
Caumont
City|Area
Status coordinate The location is in this area
Hits1,095 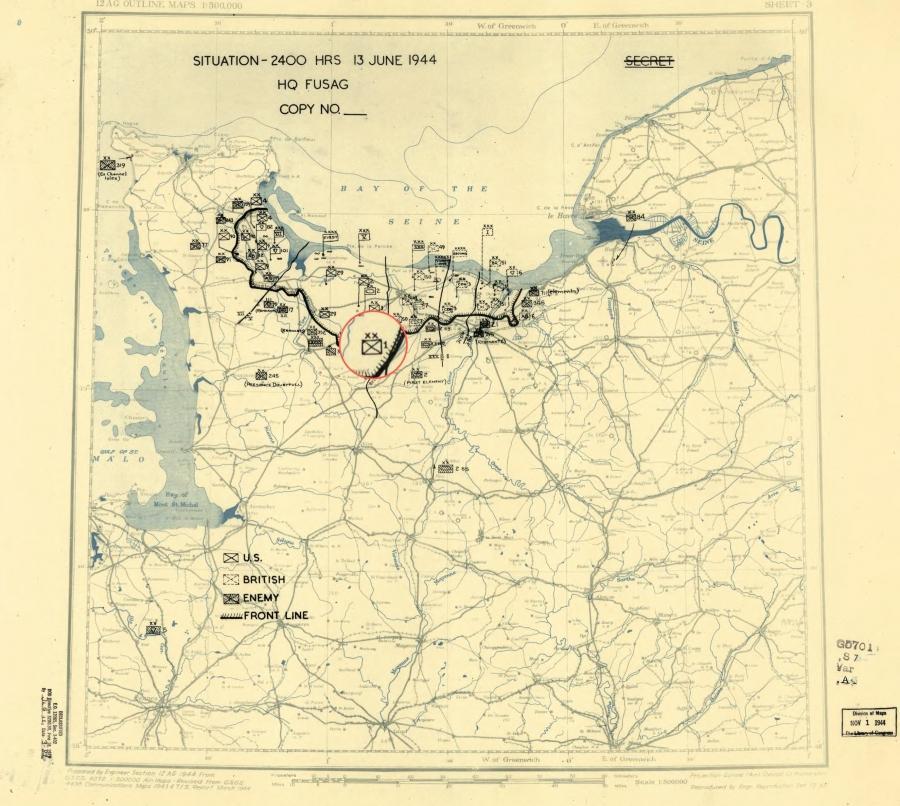 Chartres, France
Chartres
City|Area
Status coordinate The location is in this area
Hits1,232 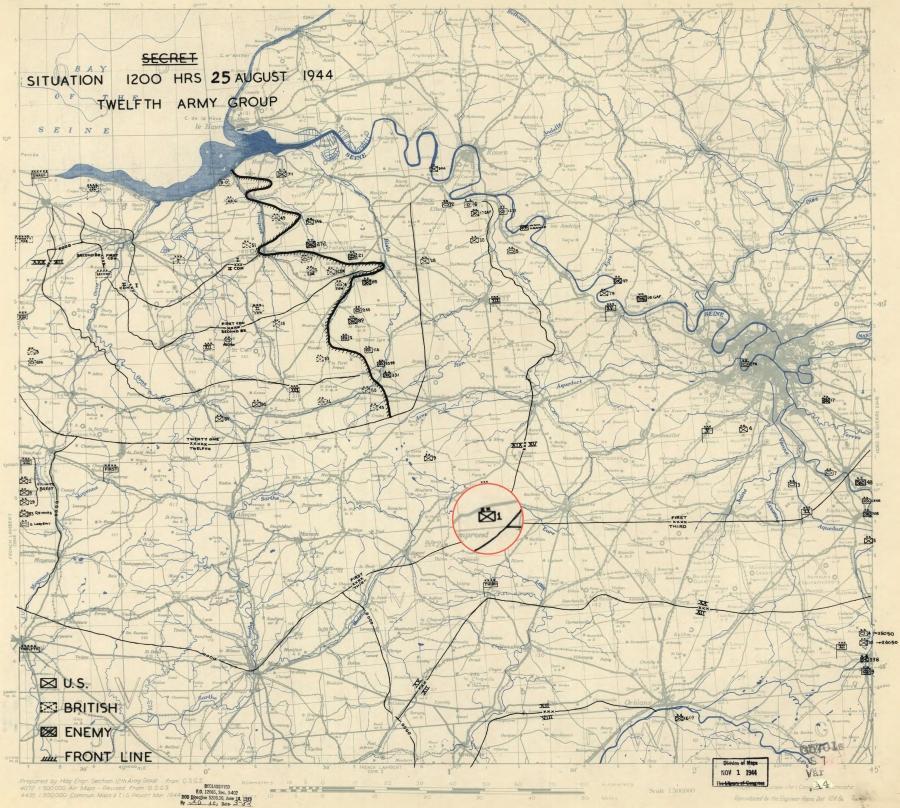 1 Infantry Division (USA) withdrew to to rest and refit 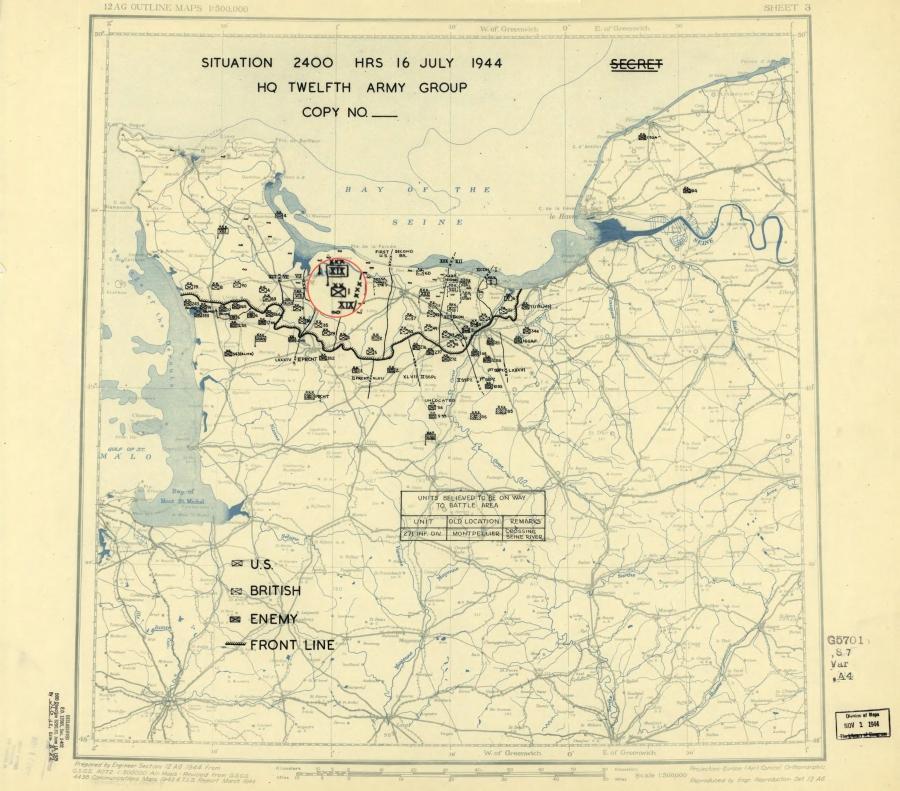 1 Infantry Division continued to defend in its sector, ...

Caumont, France
Caumont
City|Area
Status coordinate The location is in this area
Hits1,152 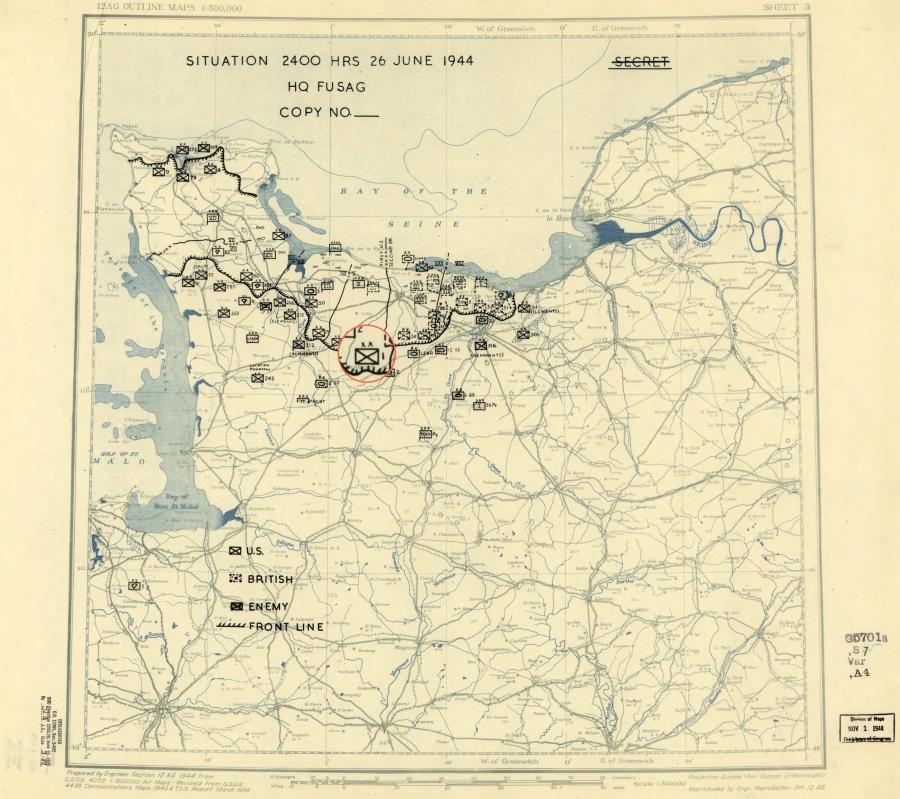 1 Infantry Division was ordered to dig in, hold what it...

Caumont, France
Caumont
City|Area
Status coordinate The location is in this area
Hits1,614 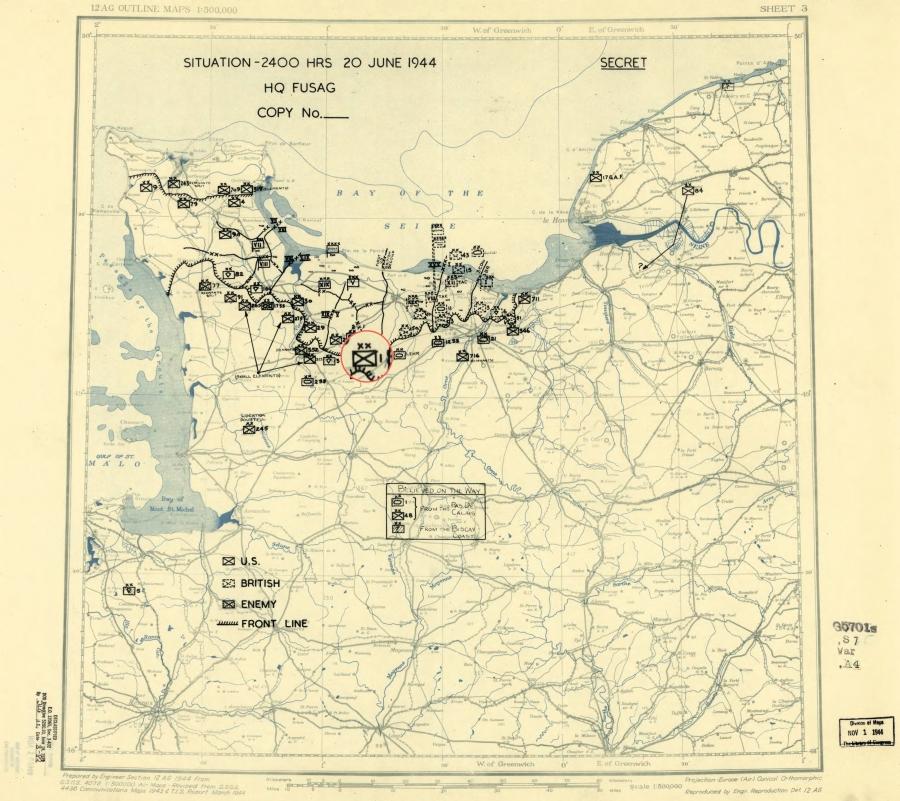 David Moeller posted a comment in 1104th Engineer Combat Group HQ in Maastricht
My friend, LT John Hamilton was billeted in Maastricht during the Battle of the Bulge. He and a SGT...
about 2 days ago

Gail Bjorndal posted a comment in 551 Field Artillery Battalion (240 Howitzer), Battery A stayed at Poole Dorset on 17 may 1944
Dad was with the 551st and told us about his arrival at a beautiful estate in Poole, Dorset until th...
about 4 days ago

Diana Gulle (Cochran) posted a comment in 190 Field Artillery Battalion (155 Gun), Battery B stayed at Bude Cornwall on 06 may 1944
My Dad Paul Cochran was part of the 190th artillary stationed in Bude during WW2. He met my Mom ther...
about 1 week ago

lisa posted a comment in 552 Bomb Squadron (Medium) stayed at Great Dunmow Essex on 07 november 1944
hi, can anyone help me. my mum used to go to eastern manor in ww2 and was with an American based the...
about 1 week ago

Colin bateman -jones posted a comment in Flight of Typhoon Ib SW523 and Squadron Leader P Bateman-Jones on 1945-04-09
Uncle Peter was not killed in the war. He survived dying in 2005.
about 1 week ago

Graeme Bennie posted a comment in Flight of Mustang IVa KH818 and Flight Lieutenant J Davidson on 1945-05-04
Joe Davidson was my mother's uncle He died on 4th May 1945 but as your note say he died in the Engli...
about 2 weeks ago

Tim Prosser posted a comment in Handley Page Halifax III (MZ649 DY-Y) on a mission to Bourg-Leopold on 1944-05-28
A correction to the above, if I may: Len and his crew were shot down over Belgium, not Holland. My m...
about 3 weeks ago

Sherrie posted a comment in Flight of Typhoon Ib MN579 and Flight Lieutenant G P Edington on 1944-08-18
George Percy Edington is my grandfather.
about 3 weeks ago

Fred Vogels posted a comment in Broniki murders by Red Army
Google stopt advertising on Back to Normandy. Because of this photo.
about 3 weeks ago

Jen posted a comment in Short Stirling I (BF387 MG-U) on a mission to Hamburg on 1942-11-10
Im the grandaughter of FL Walter Nicholls DFC, would love to hear from other family members of the o...
about 1 month ago

C.H. Japing posted a comment in The Story of “Tail End Charlie”
No, that was my father. He passed away in 2005 at 81 years of age. He was indeed born in Uleele. How...
about 1 month ago

C.H. Japing posted a comment in The Story of “Tail End Charlie”
No, that was my father. He passed away in 2005 at 81 years of age. He was indeed born in Uleele. How...
about 1 month ago

Bam Tandjung posted a comment in The Story of “Tail End Charlie”
Dear Hans Japing, By any chance, are you Henk Japing's brother? And were you born in Uleele, Banda ...
about 1 month ago

Isadora Greenberg posted a comment in 559 Anti-Aircraft Artillery (Automatic Weapons) Battalion (Mobile) stayed at Keele Hall Staffordshire on 08 november 1944
My Great Uncle was CPL Howard Friedman of the D Battery of the 559th. From my own research they were...
about 1 month ago

Isadora Greenberg posted a comment in 559 Anti-Aircraft Artillery (Automatic Weapons) Battalion (Mobile) stayed at Keele Hall Staffordshire on 08 november 1944
From what I know of my own family's history the 559th WERE in fact involved in the Battle of the Bul...
about 1 month ago

Nell posted a comment in Flight of Mustang III HB857 and Warrant Officer A J W Czerwinski on 1944-12-07
Correct details here with translation - he was a pilot officer and not killed in this misson. http:...
about 1 month ago

Kay Hefter posted a comment in Flight of Tempest V EJ653 and Pilot Officer H J Bailey on 1945-02-22
Mr Bailey was brought down near Rheine and was captured in Emsdetten (ca 9-10 mls south of Rheine) w...
about 2 months ago

Danny Wise posted a comment in 759th Tank Battalion (USA) in the area of Cherbourg Peninsula day 4
I'm looking for anyone from the 759 Tank Battalion 3rd Armor Division that might have known a Albert...
about 2 months ago

Mary Ellen posted a comment in Maurice Solomon photographic memory of D-Day
I worked with Maury in my first job. He was a humble man who loved his family dearly and spoke of th...
about 2 months ago

Neil Roberts posted a comment in Looking for info about 123 Fire-Boat Company
Hi, I have been sorting through my late grandmother's belongings and found a hand written letter fro...
about 2 months ago

Neil Roberts posted a comment in Looking for info about 123 Fire-Boat Company
Hi, I have been sorting through my late grandmother's belongings and found a hand written letter fro...
about 2 months ago
You are now being logged in using your Facebook credentials