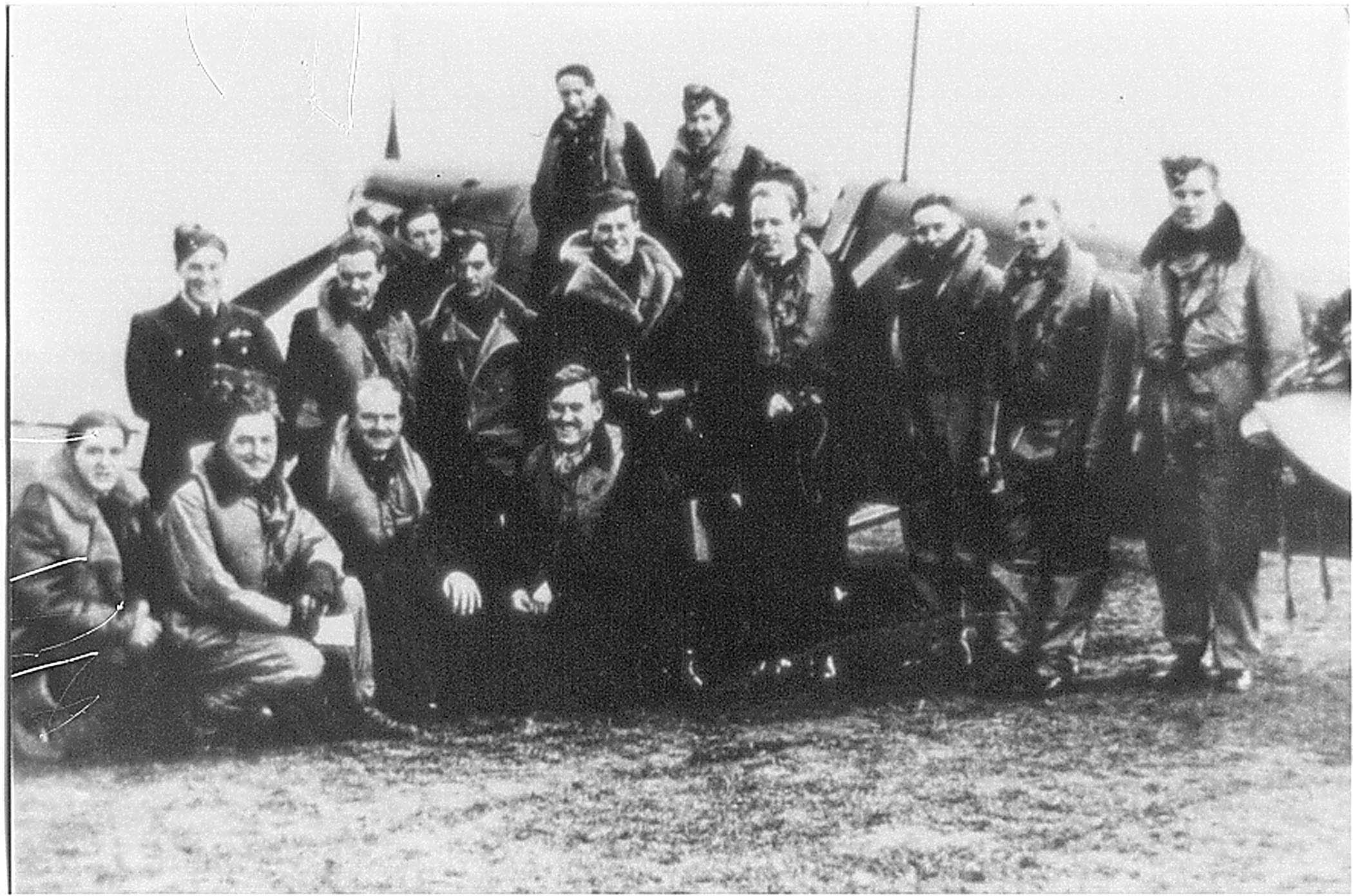 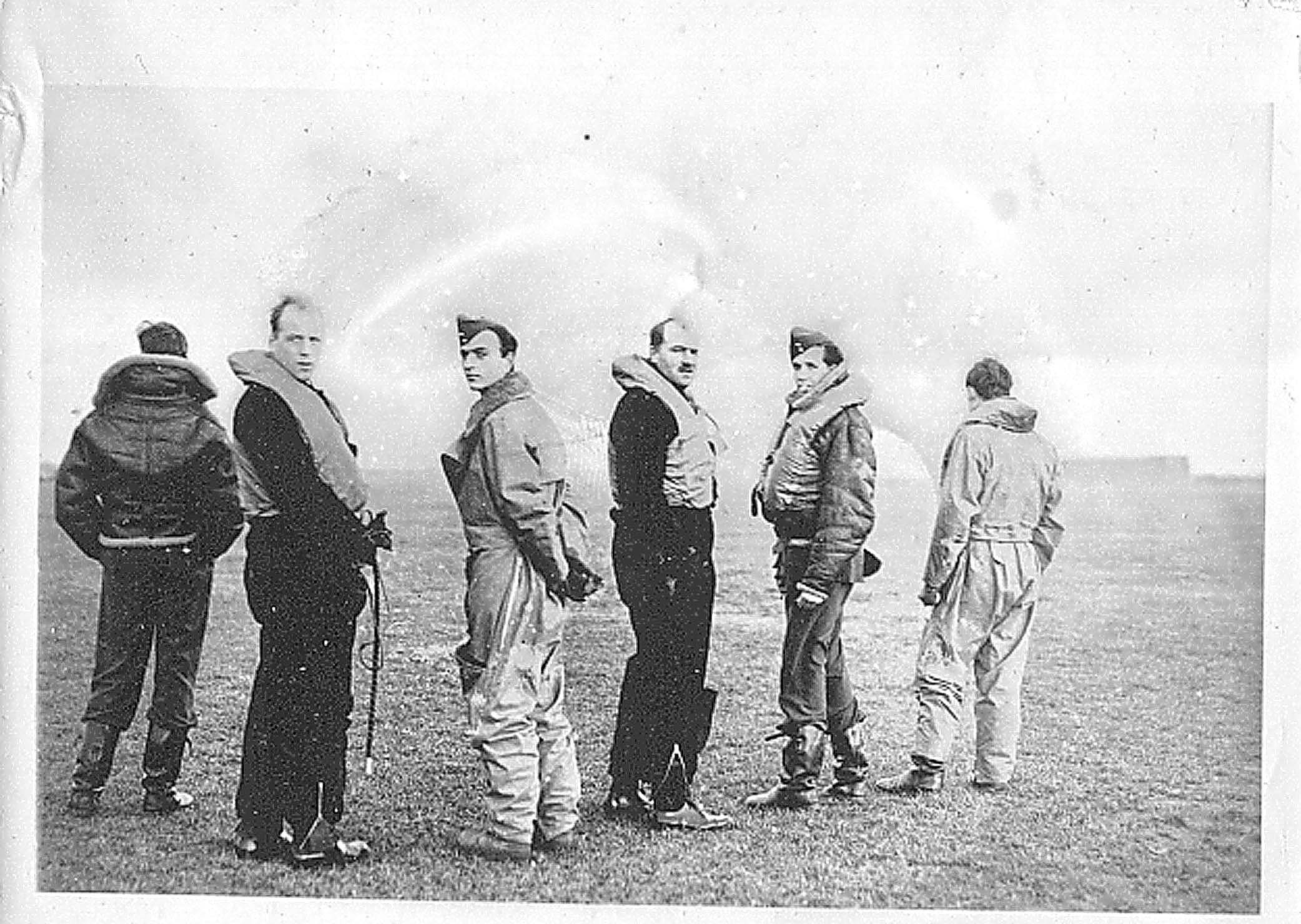 MacFie, McComb, Bazley, Leather, Watkins and Stoddart at Duxford. Speculation: It is possible that this photograph was taken at the same day as the previous one. Only Bazley has changed his clothing and is now wearing a pilots overall. 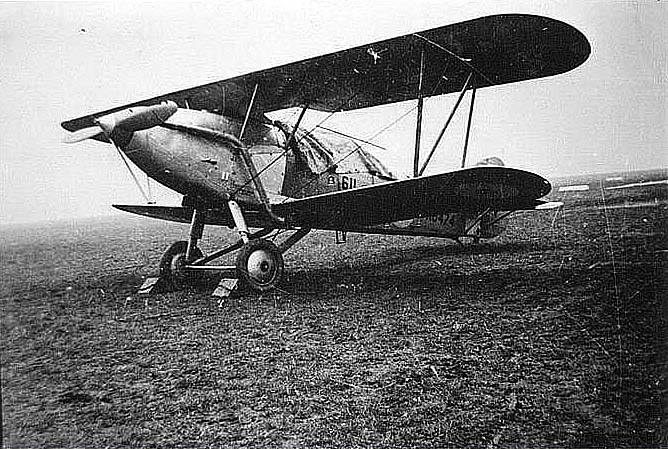 The squadron was formed at RAF Hendon, Middlesex on 10 February 1936 as a day bomber unit. The squadron set up its permanent base at RAF Speke on 6 May and began recruiting personnel from Liverpool and the surrounding area. Its first Hawker Hart light bombers arrived in June, being replaced by Hawker Hinds from April 1938.

On 1 January 1939, the unit became a fighter squadron, receiving its first Supermarine Spitfire Mk.I's in May.

The squadron left for RAF Duxford on 13 August. After a period of defensive duties on the east coast, No. 611 became fully operational from its RAF Digby base in Lincolnshire in May 1940, firstly over Dunkirk and then taking part in the Battle of Britain campaign.

The 611 had had the squadron code "FY" on the side of their planes. The squadron commenced offensive sweeps over occupied northern France in January 1941, based at RAF Hornchurch, moving to RAF Drem in Scotland for recuperation in November 1941.

The unit moved south again in June 1942 to RAF Kenley for deployment on shipping reconnaissance, escort and defensive missions. No. 611 provided covering patrols for the invasion of Normandy in June 1944 from its RAF Deanland, Sussex base.

The squadron then moved to south-west England for a short period. Long-range escort missions began to be flown from RAF Bradwell Bay, Essex, from late August 1944, until No. 611 moved to RAF Skeabrae in Orkney on 3 October. After converting to Merlin powered Mustang Mk.IV's the squadron again moved south, this time to RAF Hawkinge in Kent and resumed escort duties for the rest of the war. The squadron disbanded as an RAF squadron on 15 August 1945 at RAF Peterhead. 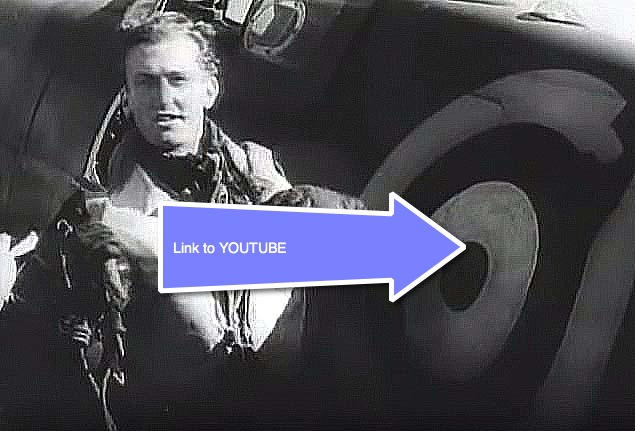 No. 266 Squadron RAF was reformed, after it was disbanded on 1st of September 1919, on 30 October 1939 at RAF Sutton Bridge as a fighter squadron. The squadron was one of the Rhodesian gift squadrons and was named 266 (Rhodesia) Squadron in honour of the gift. Originally it was equipped with the Fairey Battle light bomber, but soon after in January 1940 it received the Supermarine Spitfire and became a fighter squadron.

The squadron moved along with the fighting forces and was disbanded at Hildesheim, Germany on 31 July 1945. During his time in the RAF in 611 Sq. and 266 Sq., Sydney H. Bazley had a few daunting moments which are recorded in the flying records and combat records.

On 15th July 1940 Spitfire aircraft N3245 damaged after landing heavily during night flying practice. Pilot Flt Lt S.H. Bazley was uninjured. On the 16th of August 1940 at 12:45pm he suffered burns and minor injuries after he was shot down by a Bf109 and bailed out of his Spitfire MkI (P9312) near Canterbury.

At Wittering, Wilkinson’s Spitfires flew the usual round of monotonous convoy protection patrols around the east coast, chasing off enemy raiders. Since Dunkirk, however, the Squadron had not clashed with the Me 109; time and time again throughout the summer of 1940, inexperienced squadrons would move into the combat zone only tob e decimated on their first substantial intercept.

They were unprepared for the massively increased and vicious tempo of battle caused by the precense of Me 109’s – the experience simply traumatic, as 266 Squadron was about to discover. As hauptmann Karl Ebbighausen led his II/JG 26 Stabsschwarm back out over Deal, heading back to Marquise, Squadron Leader Wilkinson led seven 266 Squadron Spitfires down to attack the enemy escort fighters. In the subsequent combat, Ebbighausen disappeared, the third II/JG 26 Kommandeur to be lost in just three months.

The 266 Squadron, however, was virtually annihilated: Squadron Leader Wilkinson crashed in flames and was killed at Eastry Court, near Deal, and pilot Officer N.G. Bowen’s Spitfire N3095 also became a ‘flamer’, the 20 year old pilot being killed, his fighter crashing at Adisham. Spitfire P9312 was also set alight, and crashed near Canterbury, but fortunately, the Pilot Officer and commander of B-flight, Sydney Howarth Bazley baled out with burns and minor injuries.

He would be promoted to Flight Lieutenant on the 3rd september 1940, which was roughly two weeks later. Sub-Lieutenant Henry la Fone Greenshields, a Fleet Air Arm pilot serving with Fighter Command during this desperate hour of need, was reported missing: persued over the Channel and shot down by Leutnant Gerhard Müller-Dühe of II/JG 26, his spitfire crashed and burnt out in Calais, the 22 year old pilot being buried in France.

Pilot Officer S.F. Soden’s Spitfire was badly damaged and forced-landed near Faversham, the pilot slightly wounded; Sergeant Eade came off best: although his aircraft was badly damaged over Canterbury, the pilot was unhurt. Of the seven Spitfires that Wilkinson had led into battle just a few minutes earlier, by the combat’s conclusion five had been shot down, with three pilots killed, including Wilkinson himself, two more wounded and a further aircraft damaged. This outcome was absolutely disastrous, 266 being withdrawn from the front line a few days later.

Bazley was later credited for shooting down an twin engine Bf110 on the 12th of August 1940. Click on the image below to read the complete combat report.

At the 11th of September 1940, Bazley was credited with a probable kill of a Dornier 215. Click on the image below to read the complete combat report.

From the records of the RAF it could be retrieved that Bazley has at least flown the following Spitfire's during his career: 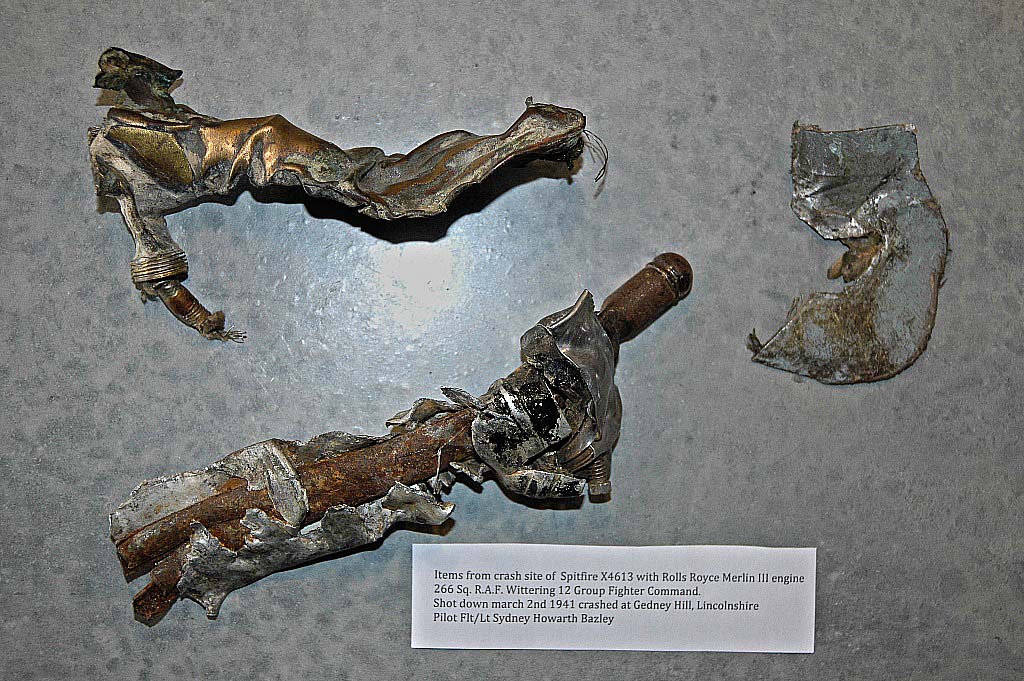 Parts of X4613, the actual Spitfire MKIa in which Bazley had his fatal flying accident.

The 266 Sq. record book states the following about the fatal crash of X4613: 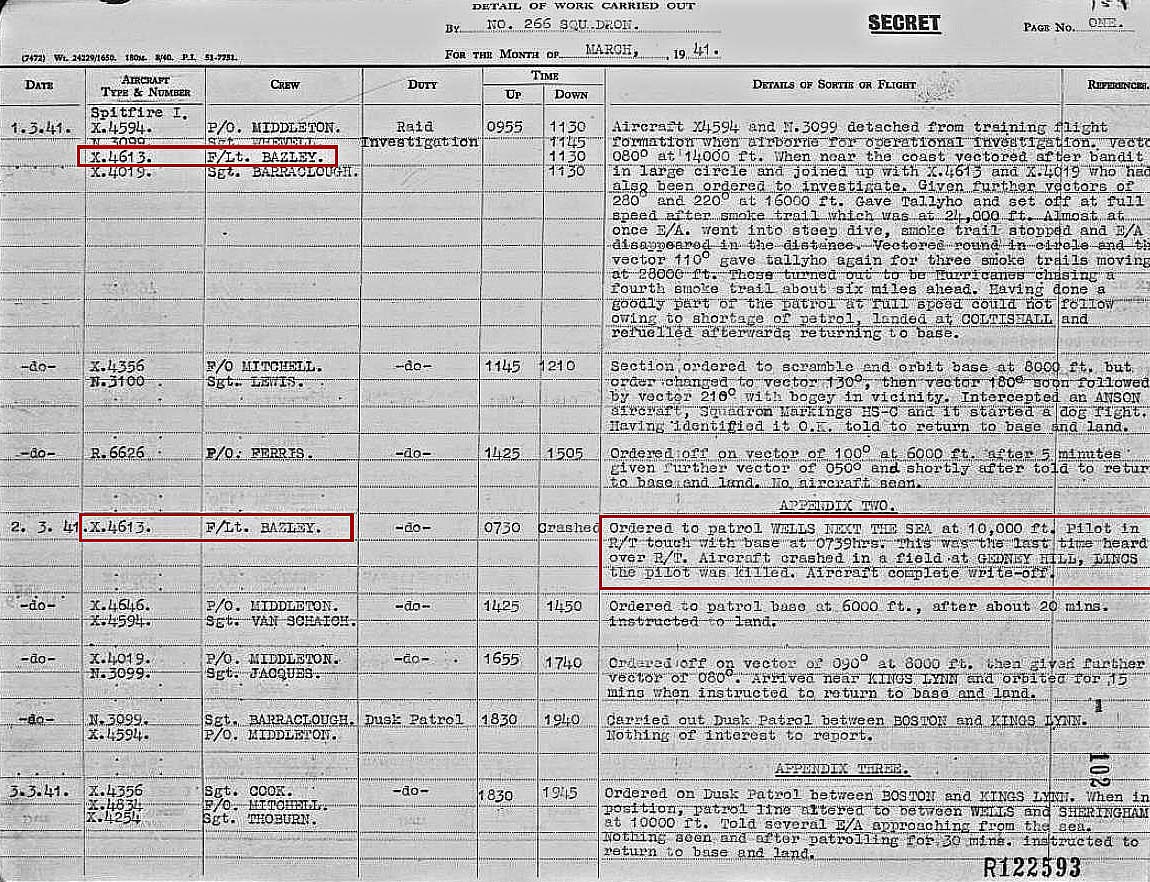 This was the last time heard over the R/T. Aircraft crashed in a field at Gedney Hill, LINCS. The pilot was killed. Aircraft complete write off. The Operations Record Book states the following about the incident: 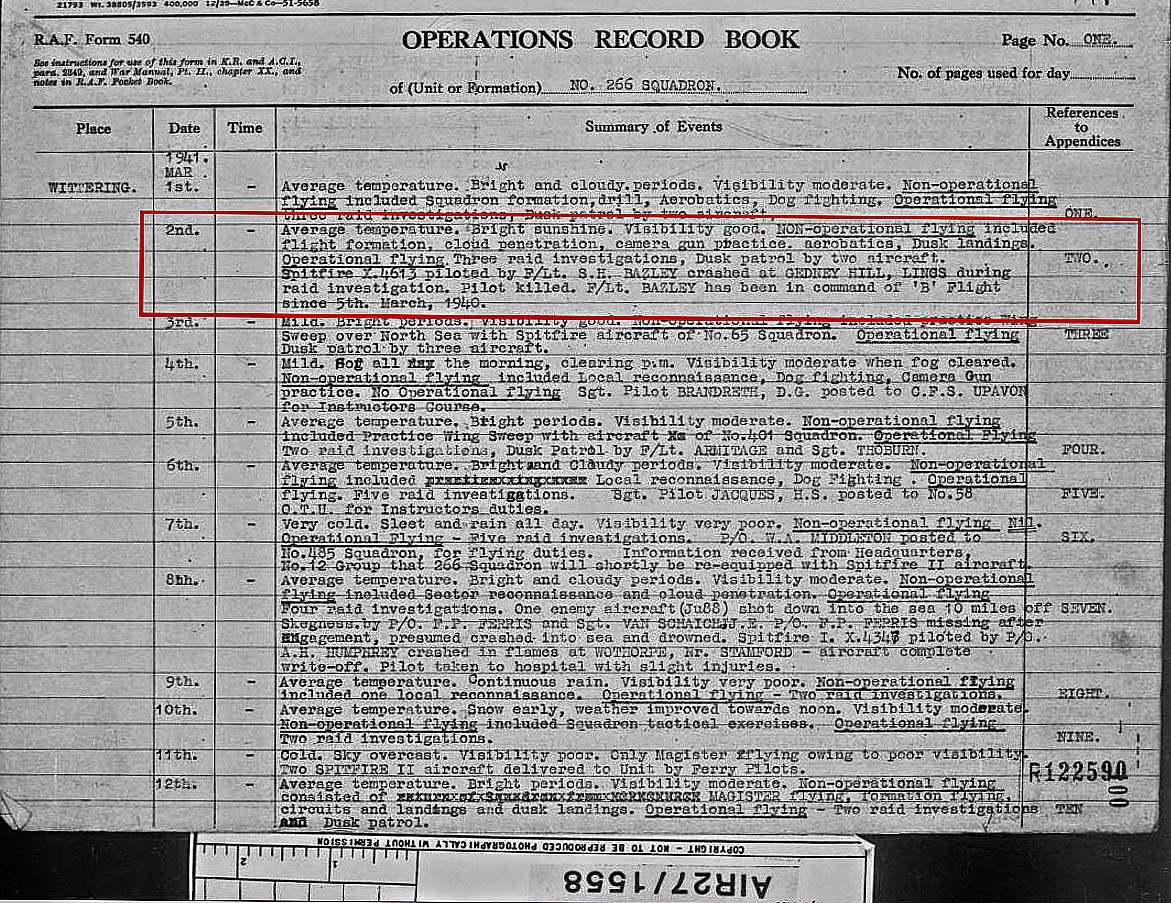 This is also mentioned in this official RAF document: 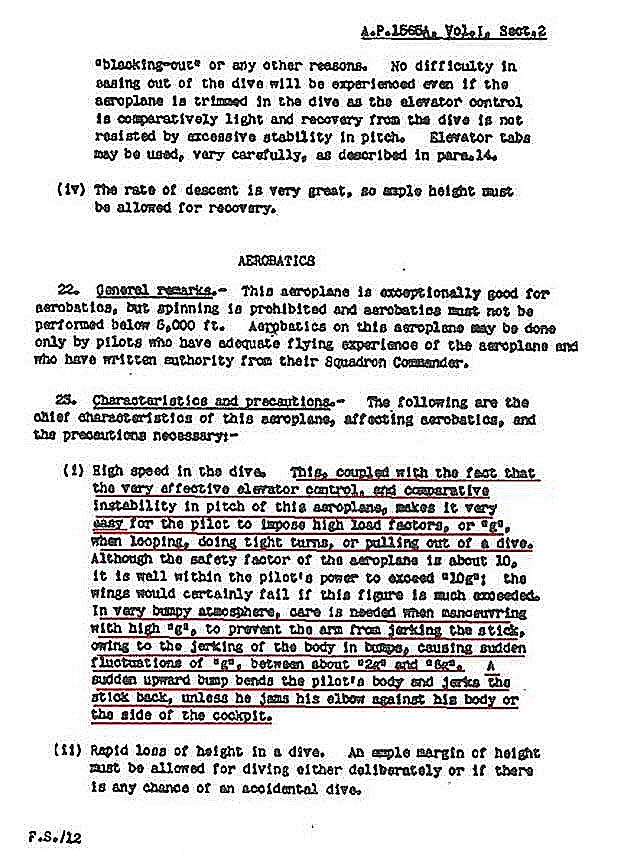 Furthermore this document seen below from the RAF archive, also states that Bazley was killed at Gedney Hill because his Spitfire X4613 lost a wing. 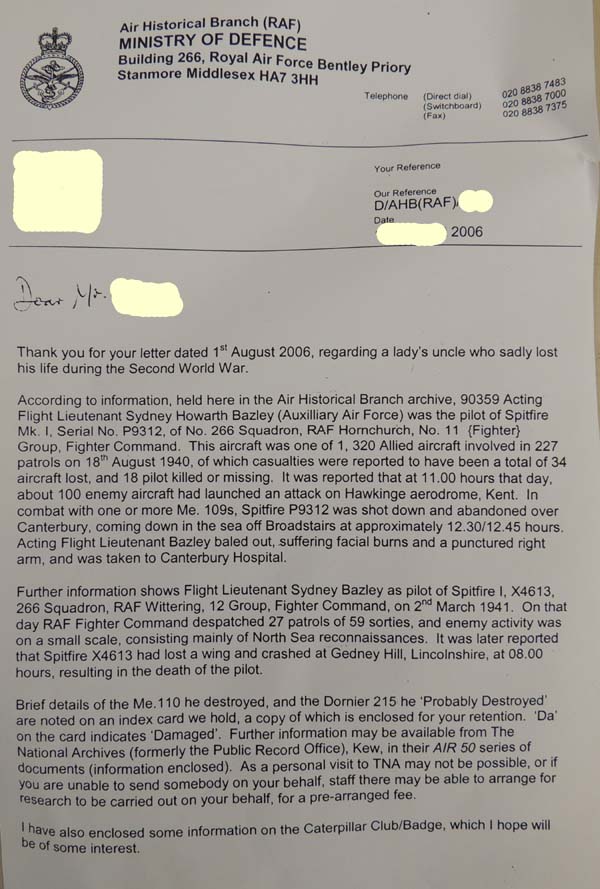