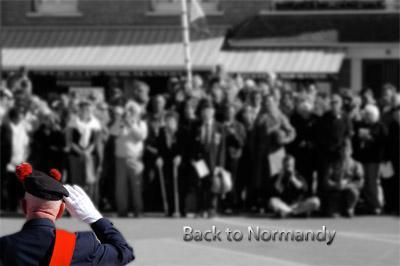 If you are running a regimental website or information service would you be able to share with Fred the information you have on your regiment’s involvement on D Day and the days thereafter??.

The beaches of Normandy and the countryside nearby are beautiful, peaceful and picturesque.   But they were not always so – in June 1944 they saw some of the fiercest fighting of the Second World War and some of the most heroic acts of bravery and courage ever seen on a battlefield.   The sheer valour of the men who landed on the beaches of Normandy on that wet and windy morning of the 6th of June 1944 changed the course of history and ensured that the evil forces of Nazism were defeated and that freedom returned to Europe.

Those beaches and the adjoining countryside are visited by many thousands of people of all nationalities each year, all interested, for one reason or another, to see where the action took place or perhaps to trace the footsteps of a member of their family who fought in the Normandy campaign or to see where a particular regiment or military unit fought and won on D Day.

It is has been a long held quest of my dear friend Fred Vogels to provide the most comprehensive and detailed database on the D Day Landings so that those wishing to trace the footsteps of a loved one or a regiment or a specific unit can do so easily and with the certainty that the route is accurate.  This will involve providing a Google map service which will identify the routes taken by units as they made their way inland from the beaches.   I have met so many people in Normandy who are trying to follow the route taken by an individual or a unit from the landing beach through Normandy – where they fought – where they rested – where an individual was shot and killed and originally buried before being finally laid to rest in one of many military cemeteries in Normandy.

So that Fred can build this unique database he needs your help. He needs you as an individual with a link to D Day – either because you fought there yourself or a relative did – to give him as much information you have about where you/they landed - the unit or regiment you/they were part of and where you/they fought if you know the details.  He would also welcome photographs which he could include on the website to make the Pathways of Courage even more real and alive.

If you are running a regimental website or information service would you be able to share with Fred the information you have on your regiment’s involvement on D Day and the days thereafter??    Any information would be gratefully received – co-ordinates, the names of villages and hamlets where actions took place or troops rested or were buried would be particularly useful.

This task which Fred Vogels is embarking upon is a labour of love and of respect for those who fought during Operation Overlord but is also borne out of a desire to keep the ethos and spirit of D Day alive so that future generations can fully appreciate the heroism and significance of what happened in Normandy in the early summer of 1944.

Please therefore help in any way you can. First look at Fred’s website which is called Back to Normandy (www.backtonormandy.org ) which gives a further explanation of what he is trying to achieve.  It also gives an amazing picture of Fred Vogels’ commitment to the cause of D Day and what it stood for and continues to stand for.

I hope you will be able to help.  By doing so you will be assisting all those who wish to learn more about Operation Overlord and helping to preserve the spirit of those courageous men who fought and died on the beaches of Normandy – on Sword, Juno, Utah, Omaha and Gold beaches and inland into France.