While he was young, there was a significant German community in Bradford. They had become established in connection with the textile industry that so many of our family were involved in. And it was apparently through contact with young people from that community that Charlie began to learn to speak German and a little Yiddish. Languages were a special interest and something that he would build on during his later war service and beyond. I remember him speaking to friends in German, Dutch and Italian and, even when speaking English, his accent would change in line with the accent of the person he was addressing. His Yorkshire accent would only come back when he was speaking to fellow Yorkshire folk.

At some point in 1937, when he would have been 14, Charlie’s family moved to Washington Street, Girlington, and his sister Ann remembers him piggy-backing her to the movies during this time when she was six years old. Ann no longer remembers what film they saw that day but 74 years later, she still remembers the day for the excitement of her piggy-back.

Charlie’s first job after leaving school had been delivering telegrams for Cable & Wireless. That lasted for something between a few months to a year. But it was around about this time that the family moved from Church Street to Washington Street and so he left his job as a telegram boy and went to work at Lister’s Manningham woollen mills as a bobbin ligger. That was a simple job that required a young person to place the spools for spinning. Harry Sheard, who was born in 1916, recalled his first job as a bobbin ligger in the nearby town of Saltaire. He began work in 1930 so, perhaps five years before Charlie. His wage then was eight shillings and he said he would always remember the overlooker: ‘His sharp toed clogs were quite painful if you didn't hurry to lig your bobbins.(*3)

Charlie’s brother Ronnie remembered a boy with the fancy name of Dradney Gilbert who lived in St Pauls Road and had a crush on their sister Gladys. Charlie swapped some cigarette cards with him for a brownie box camera, and used it to take pictures using a

cardboard cut-out that he made of local scenes. Ronnie had to hold the negatives up in a cold dark cellar on Church Street. Ronnie also remembered that Charlie was crazy about things pertaining to the War.(*4)

However, the tricks with the camera were obviously one expression of Charlie’s creativity. Lister’s mill had a staff magazine which featured imaginary characters in each edition. Dad came up with one of these which was printed (possibly with his photo?). That was perhaps around 1937 or 1938. Charlie was always a talented artist and apparently applied for some sort of financial help from the Sir John Pybus Trust to take an art course, probably at the Bradford College of Art.(*5)

The charity was established for ‘the education and advancement in life of such boys or young men of the artisan class’ from the cities of Kingston-Upon-Hull and Bradford.(*6)

In February 1939, when his application was acknowledged, Charlie was living at 20 Mansfield Road, Manningham. We have a document which was sent in reply to that application asking for further details of the family income. However, it seems that he was called up for war service before he was able to complete either the application or enrol for the course.(*7) 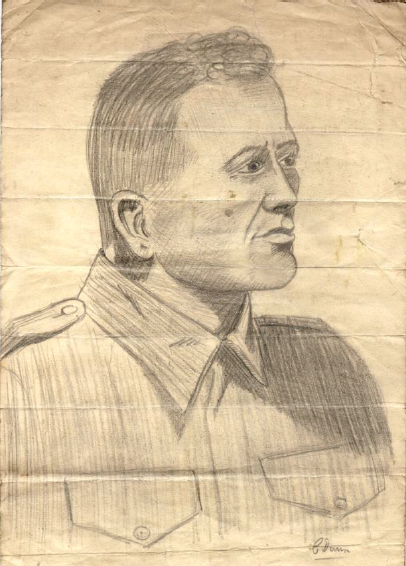 PHOTO LEFT: Early in the war, however, the Dunn’s had moved again to 13 Park View Terrace next door to where some Belgian soldiers were billeted. Charlie drew this sketch of one of them.

I was told that Charlie volunteered to serve in the army on his seventeenth birthday, which was at the end of 1939, but it could be that this was a slight exaggeration as his Certificate of Service from the Royal Armoured Corps Records Office says he enlisted in the 70th Kings Own Yorkshire Light Infantry on 13 January 1941. Although it is possible that he was previously in another unit, the word ‘enlisted’ suggests that was not the case although a curious entry in his army pay book records that he was vaccinated on 3 January 1941, ie ten days before the date of enlistment. Regardless of the precise date of enlistment, Charlie did serve a significant portion of the Second World War. With him in the army, the Dunn family covered the three main services. His father John rejoined the Royal Air Force in bomb disposal (he had served in the Royal Flying Corps in WWI) and younger brother Ronnie joined the Navy. 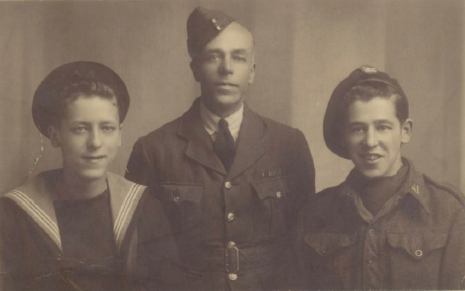 PHOTO: Ronnie, John, and Charlie in their respective uniforms.

Charlie’s pay book records his ‘description on enlistment’ as being 5 foot 2¾ inches tall, weighing 100lbs, and with a chest size 32½ inches. His complexion was rather surprisingly described as ‘pale’, his eyes brown and his hair dark brown. We always

thought he had quite a dark complexion and black hair. The pay book also records that he was trained as a member of the intelligence section in August 1942 and that he passed various aspects of gunnery training.

Charlie’s military record is not always easy to read, but it looks as though he was initially sent to Loughborough. By July 1941, however, he was in Lincolnshire. Places mentioned include Brigg, Cleethorpes, and Grimsby.

Charlie didn’t speak about his wartime experiences when we were children nor for a long time after that. However, his wife Doris mentioned an occasion when he was serving in tanks and a German was lying on the ground, unable to move due to a leg injury. For whatever reason, probably because it was too difficult to drive around him in the heat of battle, the driver was ordered to drive over him. It was obviously something that stayed with him for a long time.

PHOTO:Stobs Military Camp as it appeared in 1939 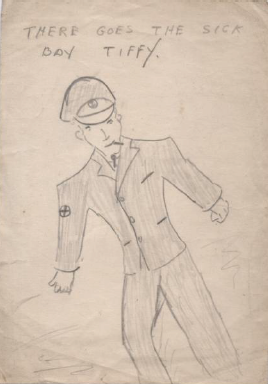 PHOTO RIGHT: One of Charlie’s earliest drawings is captioned ‘There goes the sick bay tiffy’. It seems to be a less sophisticated work than the Belgian soldier so is probably quite a bit older. According to Wikipedia, the nickname Sick Bay Tiffy (Tiffy being slang for Artificer) gained popularity from the 1890s for what the Royal Navy had originally termed a ‘sick berth attendant’. But apparently, ‘tiffy’ could also mean an engine room artificer. Perhaps the phrase was a family in-joke?