At some point during his time overseas, probably in February 1946 after the war had ended, Charlie was a motorbike despatch rider in the Netherlands and was run off the road by some Poles in a car. The Poles did not like the British and left him for dead. His service record says the injuries were of a moderately severe nature but that he was on duty at the time and was not to blame (phew! That makes a change). But, on this occasion and as if in a romance novel, he was apparently found and rescued by a young Dutch woman whose family took him in and nursed him back to health. We now know her name to have been Roelie van der Weide, and he said that the family in the Netherlands called him Danny or Danie. The story is, at least in part, supported by family documents. For example, in an undated application to the British authorities for a disability pension relating to his war service, Charlie wrote that he spent time in a military hospital in Germany (he thought it was near Wolfen-Buttel) as a result of being forced off the road by a civilian car and being thrown nine metres. Unfortunately, he was unable to remember the date of the event but it must be assumed that, since the hospital was in Germany, it must have been after the war had ended. Although there are obviously gaps in the evidence, we also know that he and his unit were based in Zwolle following the Armistice and that Roelie, who kept in touch with the family for some time afterwards, lived in that city. Wolfen-Buttel is only some 65 km from Zwolle so perhaps, having been saved by this young woman, the army sent him to the nearest hospital, which just happened to be across the German border? 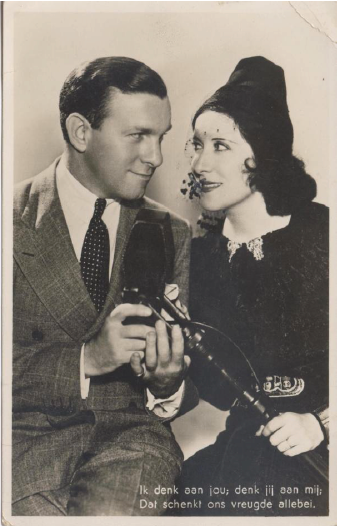 A postcard sent to Charlie from Roelie van der Weide. It appears to be a farewell message expressing the hope that they might meet again one day.

Although this card is unsigned, an undated note from Roelie’s father provides an address in Zwolle, where he was stationed after hostilities ceased, so it must be assumed that it was in that area that they met and that it was probably in 1945. The note reveals that her father’s name was H. J. van der Weide but, just two weeks after putting all these clues together, I received an unexpected telephone call from Charlie’s sister Ann in Bradford, Yorkshire. She had found some more family documents and portraits which she was going to send me but then, near the end of that very exciting call, she mentioned the van der Weide family and how she and Charlie’s other sister Gladys had gone to visit them in the Netherlands when Ann was about 18 years old. That would have been around 1949. Then she added that she had also attended the wedding of Roelie’s sister Jani a couple of years later. Ann and the youngest van der Weide sister, Trix, were teenage pen pals and Charlie’s brother Fred, who accompanied his sisters to the Netherlands on one occasion, wrote to one of Roelie’s brothers. Apparently Roelie, too, had continued to correspond with Charlie’s mother for quite a while after the war. It was in a subsequent telephone call, that Ann told me that she remembered that another sister was called Jani and that Roelie had two brothers, named Jan and Henk. At some point, probably in 1954 and when Charlie was working at Chez Ciccio’s restaurant in London, Trix went to Bradford to visit Ann so she took her down to London to visit him. My mother Doris met them first as Charlie was at work and Ann remembers them speaking in Dutch when Charlie got home. Perhaps more pieces of the puzzle might come together in time? 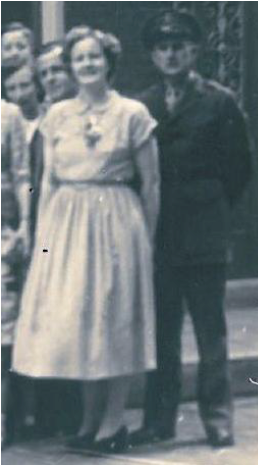 PHOTO RIGHT: Roelie van der Weide with a later boyfriend or possibly her husband in the 1950s

At one time, Charlie said he wasn’t interested in writing away for his medals. If they were worth anything, the relevant authorities would send them to him, he said. But somewhere along the line they turned up. Perhaps for a long time, like Ken Tout, he felt that: Visions of medals and honours [became] tarnished by the memory of the grey faces of the dead and the haunted eyes of the wounded.’34

My brother Andy remembered another story that Charlie told of his ‘adventures’ after the war. Typically of Charlie’s stories, it involved beer. He told of a time when he and his army mates were holding up in a town in Germany. They visited the local brewer to scrounge some beer but the brewer said he had none so Charlie started pacing about the floor saying if they were a brewery without beer, the army should use the premises for their camp. The brewer suddenly found some beer!